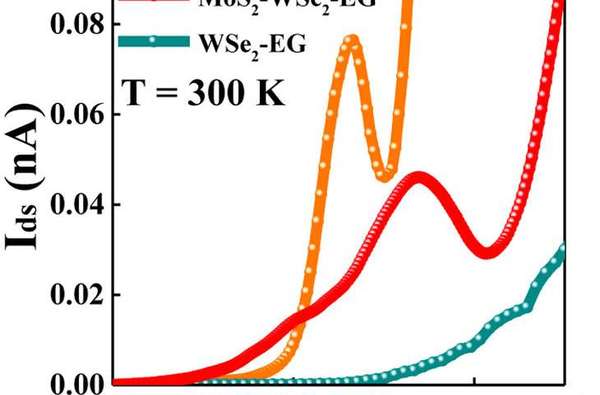 A quantum mechanical transport phenomenon demonstrated for the first time in synthetic, atomically-thin layered material at room temperature could lead to novel nanoelectronic circuits and devices, according to researchers at Penn State and three other U.S. and international universities. The quantum transport effect, called negative differential resistance (NDR), was observed when a voltage was applied to structures made of one-atom-thick layers of several layered materials known as van der Waals materials. The three-part structures consist of a base of graphene followed by atomic layers of either molybdenum disulfide (MoS2), molybdenum diselenide (MoSe2), or tungsten diselenide (WSe2). NDR is a phenomenon in which the wave nature of electrons allows them to tunnel through any material with varying resistance. The potential of NDR lies in low voltage electronic circuits that could be operated at high frequency.